Monster Jane Boolittle Doll
Be the first to review this product

Be the first to review this product 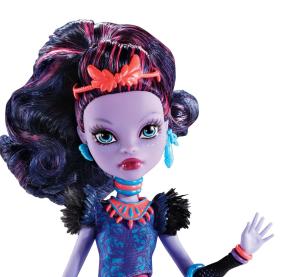 Jane Boolittle is the daughter of Doctor Boolittle.
View larger

The daughter of mad scientist Doctor Boolittle, Jane Boolittle knows how to keep a secret. Having spent years in the jungle with only animals as her friends, she?s an excellent listener! If only she felt comfortable in a crowd - instead this gore-geous ghoul prefers to fang in the Secret Creepers Crypt (sold separately) with the beast friends (aka monster pets) of her ghoul-mates.

Her pet voodoo sloth, Needles, is always by her side.
View larger

Her sidekick Needles keeps her company, though Jane has to keep an eye on him to keep the pet voodoo sloth from getting stuck - especially since he?s the keeper of her stuff. Because he likes to fang out on her back, he?s perfect for doubling as a backpack in which to stash secret stuff!

We are sorry, we do not deliver this item to ,

If you haven't signed up already, you can subscribe to our newsletters and be informed about the areas where we deliver

You can see the areas we currently deliver to here.

Remember to register or login to let the savings begin!

PleaseLogin to create a wishlist or to access to your existing wishlists.